History in your Hand – A Guide to Collecting Portrait Miniatures 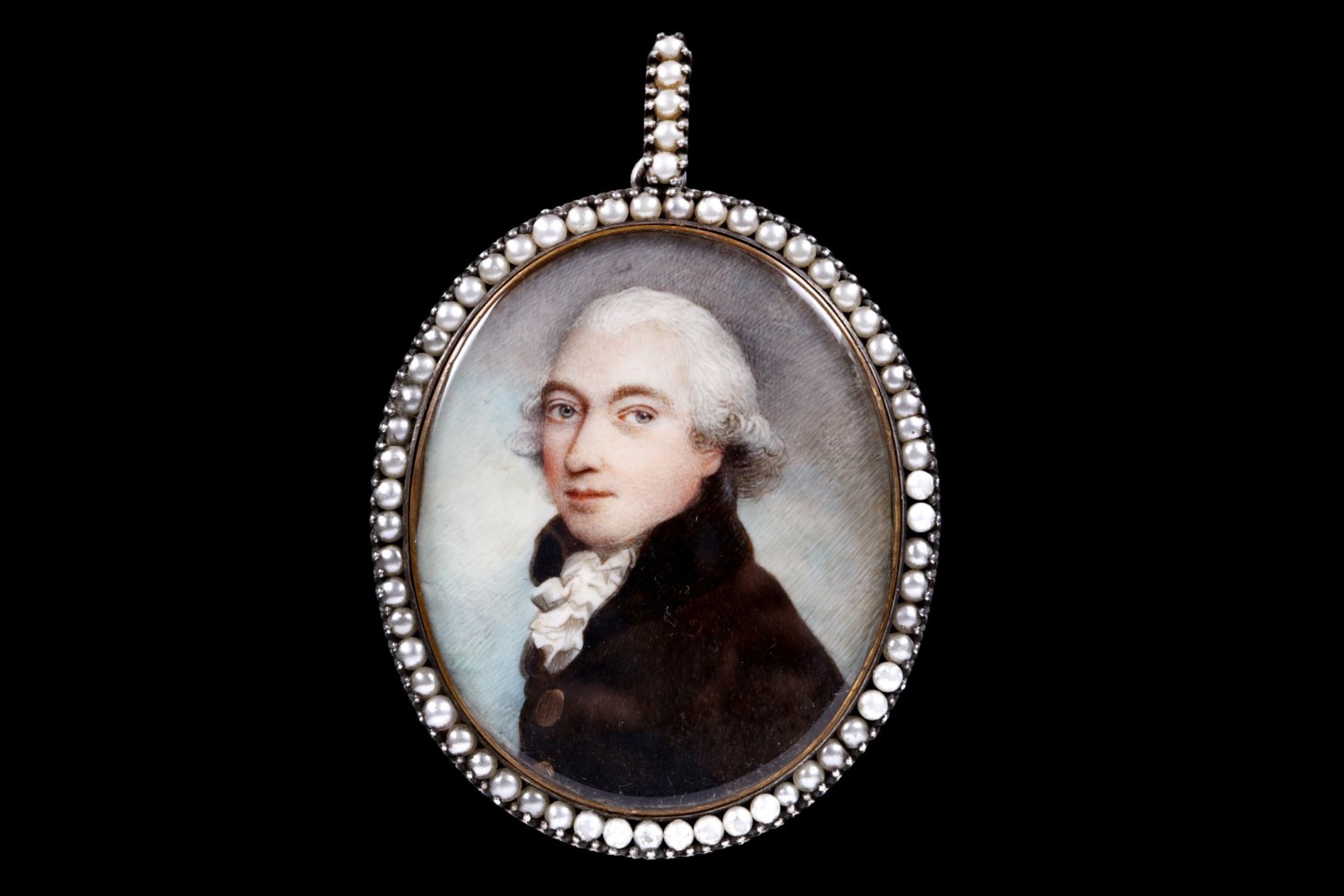 Ahead of the British and European Fine Art with Portrait Miniatures auction on 3 October, we speak to Suzanne Zack about the intriguing history of portrait miniatures. Formerly Head of Watercolours and a specialist in Portrait Miniatures at Phillips Auctioneers on New Bond Street and with more than 15 years experience in the field, Suzanne shares her insight into collecting portrait miniatures, including how to date them, what you can expect to pay and display ideas.

A limner is the traditional word used for a painter of portrait miniatures and was originally used to characterise an illuminator of manuscripts. One of the first mentions of a limner's work is found in the book of Methods and Materials of Painting by Charles Lock Eastlake. The word miniature derives from 'miniare', which means 'to colour with red lead' - a practice that refers to the type of paint used for capital letters in manuscript illumination. The first letter often incorporated a portrait and as the years passed, these were created as their own entities and subsequently the portrait miniature was born. Historically, miniatures have been created using a variety of different mediums that evolved over the centuries. Originally painted in watercolour on vellum, a type of primed calf skin that was used to illustrate hand-written Books of Hours and illuminated manuscripts, as time passed oil on copper was increasingly used and during the 18th century, which is widely considered as the 'Golden Age' of portrait miniature painting as burgeoning national wealth encouraged the art market, watercolour on ivory became the prevailing technique used by miniature artists. In the 18th century, enamel also became a popular method as portrait enamels -  painted on metal, usually gold or copper and then fired in a kiln, were a less fragile alternative to the delicate nature of ivory.

First painted in the French and English courts from the 1520's, miniatures were created as keepsakes, mementoes or gifts that were used to celebrate marriages, commemorate births or mourn the dead. Collecting miniatures originated at the Court of Francois I and spread rapidly to the court of Henry VIII in England, flourishing during Queen Elizabeth I's reign. They were particularly useful to the monarchy as their size meant they could be gifted during a public ceremony as a sign of favour. Hans Holbein had always been considered the first exponent of the miniature under Henry VIII's patronage, although current scholarship now attests that Lucas Horenbout was the first and that he instructed Holbein. Queen Elizabeth kept her miniatures locked in her bedchamber, which reflects her personal desire to keep them in a private realm.

Portrait miniatures were largely designed to be worn as bracelets or necklaces and often had a lock of hair sealed in the reverse side as a token of love. Men would often conceal them as pocket watches or set into the lids of snuffboxes. As portable objects, they were an apt accessory for secretive love affairs between a man and his mistress or political intrigues. Those commissioned by rich patrons would have often been adorned with pearls and diamonds to reflect their wealth. The small scale of  miniatures meant that they carried their own unique set of characteristics. Executed with an extremely controlled pencil or brush, this differed from the open, more noticeable brushwork seen on larger oil paintings.

Developments in portrait miniature painting during the early 19th century are demonstrated by the work of artists such as Thomas Hargreaves, Thomas Hazlehurst, Archibald Skirving and Andrew Robertson. Due to the larger size of the framed, often rectangular miniatures dating from the 19th century, this allowed the artist to include interesting details such as clothing and a background setting.

'The  diamond-glazed gold Maria Fitzherbert Jewel by Richard Cosway, a love token commissioned by the Prince of Wales for the woman he loved but was forbidden to marry, sold at Christie's for a remarkable £341,000. However, if you are starting out, you can pay as little as £150 - £200 for a signed miniature in good condition. Be careful to spot any hairline cracks.' - Suzanne Zack

Here are a selection of forthcoming highlights: 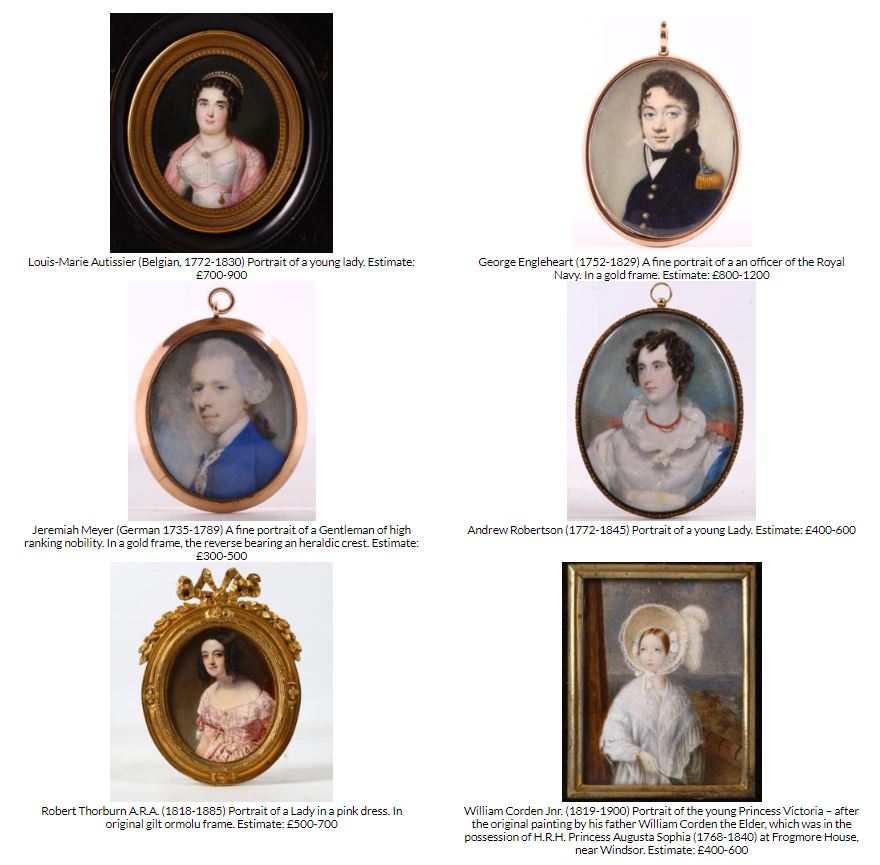 Robertson's piece, shown above, is instantly recognisable as his work, largely in part due to the fine porcelain like skin, clearly defined features and shiny hair that characterised his distinctive style. Thorburn's oval miniature is noticeably larger than its predecessors, reflecting the stylistic influence of photography during this period.

Ever since the collecting habits of King Charles I, miniatures have been artfully assembled and displayed in cabinets, similarly to other precious objects.

'If you love portraits but do not necessarily have the space to hang them, portrait miniatures are charming and versatile pieces to collect that can be displayed in attractive cabinets with velvet or satin ribbons or on Bijouterie tables' - Suzanne Zack

Miniatures can be dated according to a variety of factors, such as style or medium. Furthermore, miniatures often depict men or women wearing the latest fashion trends, so their clothing is another useful factor when dating a work. However, because predominantly only a bust is depicted, hairstyles, hats and wigs are a particularly helpful indication.

Popular ways to start a miniatures collection include focusing on a particular artist, a particular school, (modest or continental) or around themes such as images of officers, beautiful women or angelic children.

Here are a selection of the portrait miniatures previously sold at Chiswick Auctions: 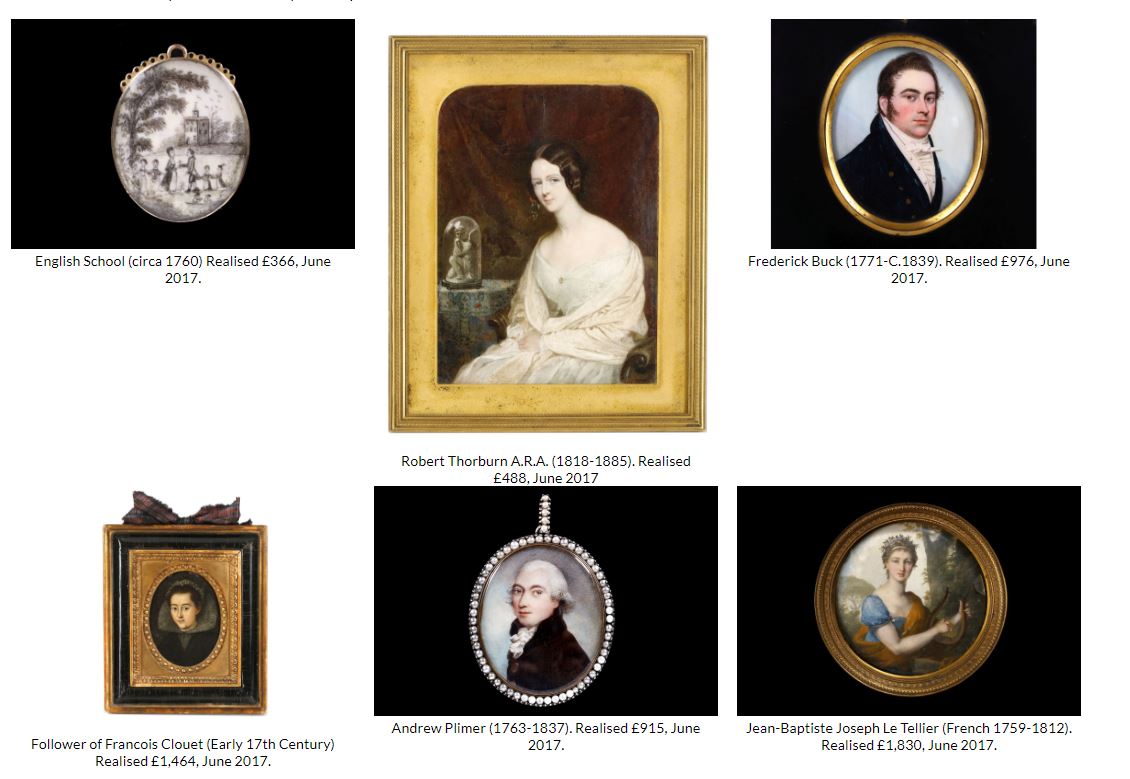 Entries are currently invited for the forthcoming Fine Art auction in October. For a complimentary consultation or to discuss the market, please contact: suzanne@chiswickauctions.co.uk before 10 August.